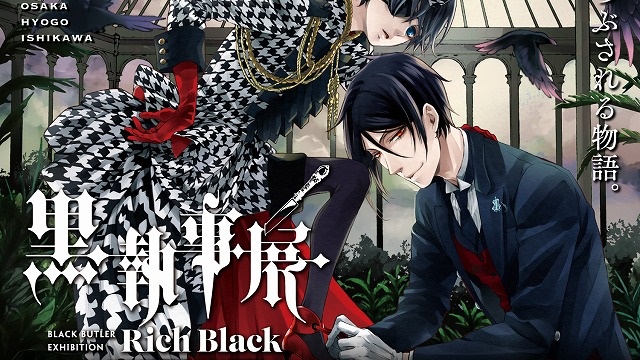 To commemorate the 15th-anniversary of the serialization of Yana Toboso’s popular dark fantasy manga series Black Butler in the monthly magazine G-Fantasy, Square Enix will hold the special exhibition titled “Black Butler Exhibition -Rich Black-,” starting in August 2021 at the Matsuya Ginza department store in Tokyo in August 2021, then traveling to Osaka, Hyogo and Ishikawa.

The Black Butler manga has been serialized in the magazine since September 2006. Through a wide variety of mixed media projects, including TV anime, anime feature films, live-action feature film, and musicals, the series has gained popularity not only in Japan but also all over the world, printing more than 30 million copies worldwide as of April 2021.

The exhibition, which will start touring nationwide this summer, is based on the concept of the theme color “Rich Black” (a black that is deeper than black, created by layering various colors on top of black), and will feature the author Yana Toboso’s beautiful hand-drawing illustrations. It will also display original manga drawings to look back on many famous scenes of the popular episodes from the manga’s “Red Butler Arc,” “Circus Arc,” and “Luxury Liner Arc” to the latest “Blue Cult Arc.” In addition, original goods for the exhibition will also be available at the venue.