‘Shingeki no Kyojin: The Final Season’ Continues with Second Part 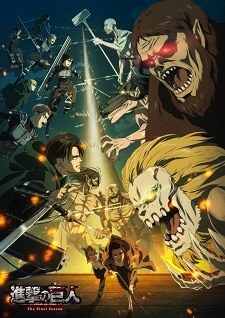 Gabi Braun and Falco Grice have been training their entire lives to inherit one of the seven titans under Marley’s control and aid their nation in eradicating the Eldians on Paradis. However, just as all seems well for the two cadets, their peace is suddenly shaken by the arrival of Eren Yeager and the remaining members of the Survey Corps.

Having finally reached the Yeager family basement and learned about the dark history surrounding the titans, the Survey Corps has at long last found the answer they so desperately fought to uncover. With the truth now in their hands, the group set out for the world beyond the walls.

In Shingeki no Kyojin: The Final Season, two utterly different worlds collide as each party pursues its own agenda in the long-awaited conclusion to Paradis’ fight for freedom. [Written by MAL Rewrite]

The anime series adapts Hajime Isayama‘s fantasy post-apocalyptic manga, which began in Bessatsu Shounen Magazine in September 2009. After an 11 and a half years run, the manga will end in the magazine’s May issue on April 9. Kodansha published the 33rd volume on January 8, with the 34th and final volume shipping on June 9. Shingeki no Kyojin has a cumulative 100 million copies of its compiled volumes in circulation worldwide.

Wit Studio produced the first 25-episode television anime in Spring 2013. Pre-production of the second season began as early as 2014, which premiered in Spring 2017. The third season debuted in Summer 2018, with its second half airing in Spring 2019.

The final season, produced by animation studio MAPPA, began airing on December 7 last year. Crunchyroll and Funimation simulcast the anime with subtitles as it aired in Japan.

Kodansha USA licensed the manga in English in October 2011 and shipped the 32nd volume on December 22. The 33rd volume is planned for an April 27 release. The manga has also been published in multiple foreign languages, including French, Italian, German, Spanish, Portuguese, Polish, and Chinese.

Funimation licensed the anime series in North America and distributed the first season in two Blu-ray and DVD volumes in June and September 2014. The second season was released on a single volume in February 2018. The third season shipped in two home video installments in August 2019 and March 2020.

Shingeki no Kyojin won the 35th Kodansha Manga Awards in the Shounen category and was nominated for the 4th Manga Taisho awards in 2011, as well as the 16th and 18th Tezuka Osamu Cultural Prize. The manga also placed sixth in the male readers’ division in the 2014 Kono Manga ga Sugoi! rankings.

Shingeki no Kyojin: The Final Season Part 2 on MAL